The International Rules series, between the AFL and GAA, is set to return in 2020, the first time since 2017.

The two sides agreed to the next series of hybrid games between Australia and Ireland, with provisional dates being Sunday, November 15 and Saturday, November 21, with the games being played in Ireland, according to afl.com.au

The November 21 game coincides with the 100th anniversary of Bloody Sunday, when 32 people were killed or fatally wounded and hundreds more injured at Croke Park stadium in Dublin, when British soldiers opened fire on the crowd attending a football match.

The location of the 2020 games has yet to be confirmed. The series will then be held in Australia after the 2022 AFL season finishes.

GAA Director General Tom Ryan said: “We are pleased to announce the return of the International Rules Series in 2020 and look forward to re-connecting with our friends and colleagues in the AFL, both on and off the field.

“The series offers our players the chance to wear the green jersey and represent Ireland and it also provides them with an opportunity to pit themselves against the best from another code while showcasing the best skills of Gaelic football,” he added.

Australia reclaimed the Cormac McAnallen Cup in 2017, winning both games, held in Perth and Adelaide.

Formed and affiliated to the Gaelic Athletic Association in 1975, the Queensland state branch of the GAA includes football, hurling and camogie teams. They are based at Gaelic Park in Willawong, Brisbane.
Queensland Gaelic Football and Hurling Association website

The Irish Embassy in Canberra works to promote Irish interests in Australia and also provides a range of key consular services to Irish citizens.
Embassy of Ireland, Australia website

Did you know that you can still read back issues of Irish Queenslander magazine online?

Remember how we brought you the story of Ireland’s biggest pothole swallowing a Renault Clio on 29 December? Read it here The story went viral on social media.

The truck was on its way yesterday to deliver to local pub Poc Ar Buile, which has been cut off in recent weeks by both flooding and potholes, when the giant pothole, hidden under flood waters, captured the vehicle.

Poc Ar Buile owner Michael Murphy said: “I pity the poor driver, the shock of what happened to him. Three axels buried. Tractors tried to pull him out and failed. A crane was called to get him out.”

A passerby, local man Kevin Heffernan, shared the photo of the truck on social media. He said: “At first, I thought a truck was fixing the huge pothole. On closer inspection, I realised the truck was in the fecking pothole!”

Large sections of road around the area are now impassable, following the recent storms, with more heavy rains forecast from today. Locals have been pitching in, helping to clear flood waters and tow cars stuck in what remains of their roads.

Local woman Mary Hickey said: “Large sections of road at Glanturkin, Whitegate are impassable for cars and not safe for Jeeps either as they have very deep mud holes. My family have assisted to tow 30 vehicles out of holes in the last few days.”

There was a bright side to the story. Yes, the Murphy’s did eventually get delivered to Poc Ar Buile. The only problem now is, you’ll probably need a tractor to get through those roads to enjoy a pint of it. 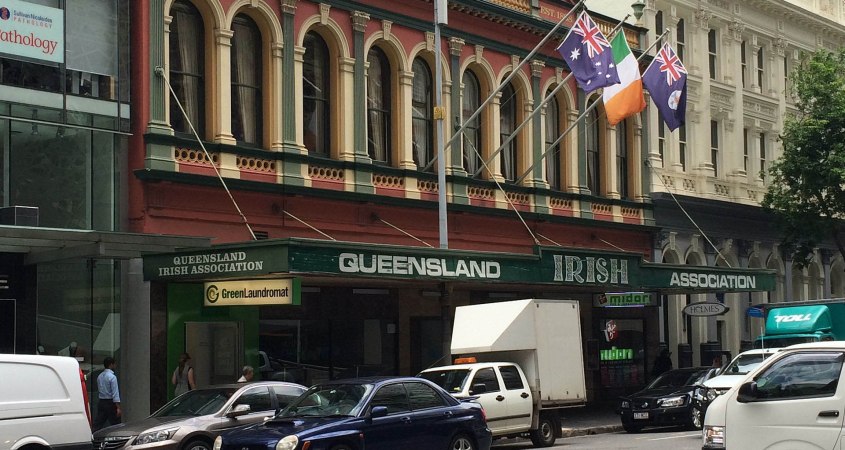 ALL hope is now lost that Tara House, headquarters of the Queensland Irish Association (QIA) since 1919, can continue as the home of the Irish community in Queensland.

The QIA Steering Committee has confirmed that lease negotiations with the new owner of Tara House have not been successful.

Angela Laylee of the QIA Steering Committee said: “The rent that the owner has been offered from another tenant was too high for us to be able to match on a responsible and reasonable assessment of potential future trading figures.”

She added: “I cannot express how devastating it is for me to bring this news to you.”

Tara House is a heritage-listed former club house at 179 Elizabeth Street, Brisbane. It was designed by legendary Donegal architect Richard Gailey. Building began in 1878 and the Irish Club owned and operated the building from 1919.

The Queensland Irish Association is the longest continuously operating national association in Queensland. Tara House has been visited by Irish presidents, including Eamon de Valera and Mary Robinson, and Ambassadors. In 2003, the QIA celebrated its centenary, with then-Irish President Mary McAleese making the celebrations the centrepiece of her state visit that year.

The association had suffered major setbacks with financial problems and declining membership during the First World War and the Depression but always pulled through. Yet, despite a huge influx of Irish immigrants into Brisbane in recent years, the club had been struggling financially and was placed into administration in January after accumulating a large amount of debt.

Arrangements are being made by the liquidator to remove and store all the QIA’s possessions of cultural and historical significance.

The Steering Committee and sub-committees of QIA hope to call a meeting of former members in the new year to present proposals for the future operations of the QIA.