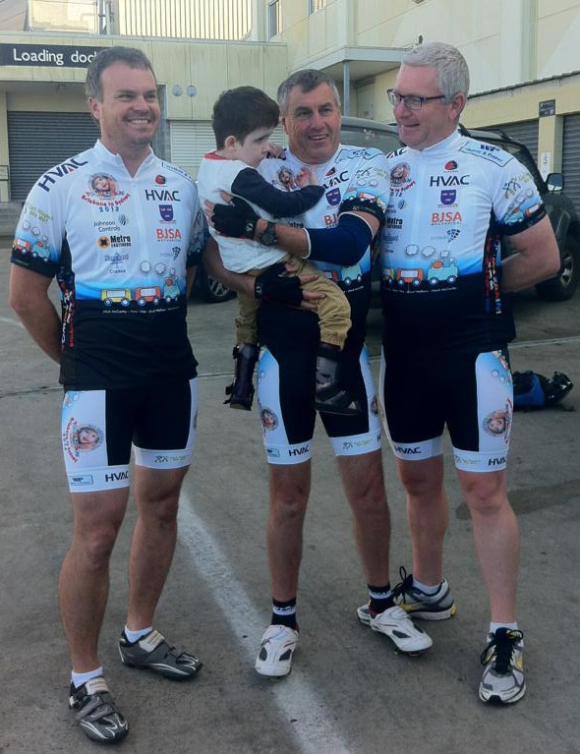 THREE cyclists have set off on an epic journey from Brisbane to Sydney, to raise money and awareness of a rare disorder, 1P36 Deletion Syndrome.

Mick McCarthy, originally from Kilmallock, Co. Limerick but now living in Loganholme, joined two other riders on the 1,046km ride.

The cyclists are raising funds for Team Tommy, in aid of Tommy, aged four, who has the genetic disorder, which means he is missing a very tiny part of Chromosome 1. Symptoms include low muscle tone, seizures, hearing loss, vision delays, speech problems and inability to feed orally, amongst other health issues.

Tommy has been making progress – he can take steps using a supportive walker device (purchased with the help of Team Tommy’s Developing Foundation funds), makes sounds and eye contact.

His parents said: “When people spend time with Tommy, they learn what a joy he is – his smile, cheekiness, big brown eyes, laughter and purity have been known to melt even the most serious of doctors.”

Mick McCarthy’s son Mark is driving a support camper van on the journey. They left from Westfield Garden City in Mount Gravatt this  morning (Sunday, August 18), having already raised more than $14,000.

The cycle will be broken into seven stages over seven days – from Mount Gravatt to Byron Bay (160km), then to Grafton (170km), Nambucca Heads (130km), Port Macquarie (120km) Bulahdelah (150km), The Entrance (160km) and finally, from The Entrance to Sydney (85k). The cyclists will arrive in the New South Wales state capital on Saturday, August 24, having ridden 1,046km in aid of Team Tommy.

The riders are Brad Wallace, Peter Viles and Mick.

To find out more about Tommy’s condition or make a donation, see http://www.developingfoundation.org.au/family/tommy